In this article, ANSA member Nadine Segadlo tells us about her personal learning process regarding racism and colonial history and introduces us to the organisation “Bridging Gaps e.V.”, which has recently published a new brochure.

Doing a one-year voluntary service with the “weltwärts” programme in Tanzania after high school has been the greatest learning experience for me so far. Next to experiencing different realities of life and establishing deep friendships, it was also the starting point to reflect on racism, colonial history and the relationship between the Global North and the Global South. I started reading the works of post-colonial writers, studied African history and participated in “Critical Whiteness” trainings. It made me understand how racism is a structural problem in our society and how my socialization in this society has affected my perceptions and behaviour. Being white in the white majority society in Germany comes along with privileges that require critical reflection and offer room for active engagement.

Friends of mine at the University of Konstanz were equally eager to learn more about racism and social inequalities. One of them, Juliane, had started a project in South Africa in 2014 called “Bridges Camps”. Two decades after democratic dispensation, South Africa’s apartheid history still influences societal interactions. To challenge the presence of racial segregation in the mindset of many South Africans, “Bridges Camps” brought together young people from different parts of South African society and provided a platform to get to know each other and to reflect on stereotypes they had on others. Through various games, activities and exercises teenagers learn about topics like racism, social inequalities and societal structures. By offering various programmes, participants are invited to become facilitators at following camps and engage more with the raised topics through workshops and empowerment activities.

A new organisation and broadened horizons

While working with teenagers in South Africa on forms of discrimination and at the same time critically monitoring the German society, the need to also become active in Germany emerged. Consequently, in 2015 Juliane and her friends founded the organisation “Bridging Gaps e.V.” which aims at overcoming prejudices, lowering racism and social inequalities in both South Africa and Germany. It was at that time that I myself, like other founding members, had spent time in South Africa for an exchange semester and an internship. This stay had helped me to continue my reflection process on white privileges and societal structures. Therefore, I got involved in the association “Bridging Gaps” and helped establishing its work in Germany. I became the coordinator of the regional group in Konstanz. We created platforms for exchange on and sensitization to local and global inequalities. Our activities address topics like everyday racism, colonialism, gender inequality and global power structures. We regularly conduct workshops and trainings on these issues and have implemented various projects in this context. Examples are the production of the documentary film “Schenkt uns Gehör”, in which 14 young black people speak about their experiences with everyday racism in Germany and the exhibition “‘Wo kommst du wirklich her?’ Un-Sichtbarkeiten, Alltagsrassismus in Deutschland”, that deals with being white and having privileges in the German context.

To foster our aim of critical political education of young people, we have been organising an annual “Bridge the gap” youth exchange between German and South African teenagers since 2017. Realising the importance of engaging creatively with young people on discriminatory power structures and inequalities we recently published the brochure “Spaces between and beyond // Zwischenräume”. In this brochure, former youth exchange participants creatively reflect in diverse textual contributions on power, inequality and social justice in a German and South African context. We aim to reach people of different ages who are interested in topics such as intersectionality, racism, (post)colonialism and more. The brochure is available on our website and can be downloaded as a PDF for free.

More information on the organisation Bridging Gaps e.V. can also be found on our website and on Facebook. 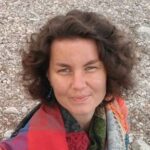 Nadine was born in Germany and is an ANSA member since 2017. She studied Politics and Public Administration in Konstanz and Pretoria and International Development Studies in Utrecht. She gained experiences in Tanzania, South Africa and Ghana and now works as a researcher at Osnabrück University. She joined Bridging Gaps e.V. in 2015 and became the coordinator of the regional group Konstanz.